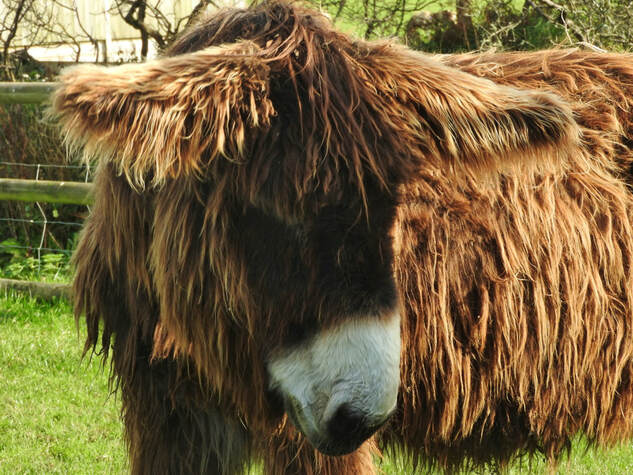 Vagabond D'Hamerton (Bertie) was born in 2007 and came from a zoo – he is a huge 15 hh and a very rare breed of donkey; The Baudet du Poitou. The breed - originally from France - is thought to be one of the oldest species of donkey in the world.

Bertie is a beautiful boy, very stoic, friendly and laid back; his bray is softer and more 'raspy' than that of the other donkeys. Heart-breakingly, he lost his little brother, Humphrey, in September 2020, but he is completely besotted with Hermione and Doris (two of the smallest donkeys here!) who helped him cope with this sad loss.

Up until the years following World War II, the Poitou played an important role in supplying quality mules to France and the rest of Europe. It is said that the mule resulting from the union of a Poitou and a Mulassiere is the finest working mule in the world. Whether this is indisputably true, we cannot say, but a Poitou mule, more often than not, fetches a higher price than any other. It has been estimated that in the heyday of the industry, the Poitou region produced as many as 30,000 mules per year.

After the war, mule production began to drop off. Tractors and automobiles were replacing draft animals in every profession. Without a reason to produce mules, there was little reason to raise Poitous, many herds were culled. The decline of the breed was swift. By 1977, only 44 donkeys of any age could be counted, held by a few dedicated breeders. Fortunately, the cry was raised and efforts to save the breed began. Today, there are perhaps as many as 180 purebred Poitou Donkeys, but that number is still far from safety.
We are delighted to have the gorgeous Bertie here at the sanctuary...
Adopt Bertie now!