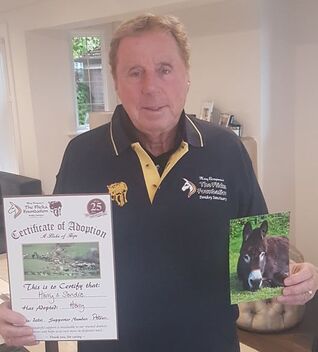 ​We are absolutely delighted to announce animal lover Harry Redknapp
as our new patron for 2020, our 25th Anniversary year!

This is what Harry had to say:
​
"Meet Harry the donkey, my new friend down at The Flicka Foundation Donkey Sanctuary in Penryn, Cornwall. Harry is one of the many animals that's cared for by this fantastic sanctuary - and I'm so pleased to be a new Patron of the charity" Paul O’Grady is also a patron for Flicka!

​Most people know of Paul’s passion for all animals – his dear dogs ‘Buster’ (sadly no longer with us) and Olga, Louie and Bullseye and all the animals at Paul’s farm in Kent.

We were thrilled when Paul became a patron of our charity.
​ 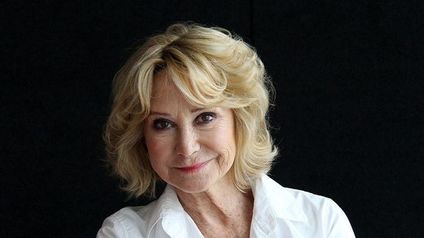 Felicity Kendal, the well-known actress and star of TV’s ‘The Good Life’ and ‘Rosemary & Thyme’, is a patron of Flicka.

Warwickshire-born Felicity grew up touring India and the Far East with her parents’ Shakespearean travelling theatre company, before returning to England in the 1960’s to make her debut on the London stage as Carla in Minor Murders. She has enjoyed an extensive career in theatre, film and television, perhaps most famously appearing as Barbara Goode in BBC’s The Good Life. Most recently she starred alongside Ralph Fiennes in 'How Proust Can Change Your Life'.

Caroline with Annabelle the donkey during a visit to Flicka!
We are delighted to have had Caroline Quentin as a loyal patron for many years. Caroline stepped down from her charity duties in 2020, but we are so grateful for all the support she has given the donkeys over the years.


Caroline is well known for her roles in ‘Men Behaving Badly’, ‘Jonathan Creek’, ‘Life Begins’, ‘The Life of Riley’ and ‘Blue Murder’.

​
"I am thrilled to be a patron of The Flicka Foundation; the hours of hard work and dedication from Judy, Laurie and the team are visible the moment one sees the healthy happy animals, inspirational".
​Caroline Quentin