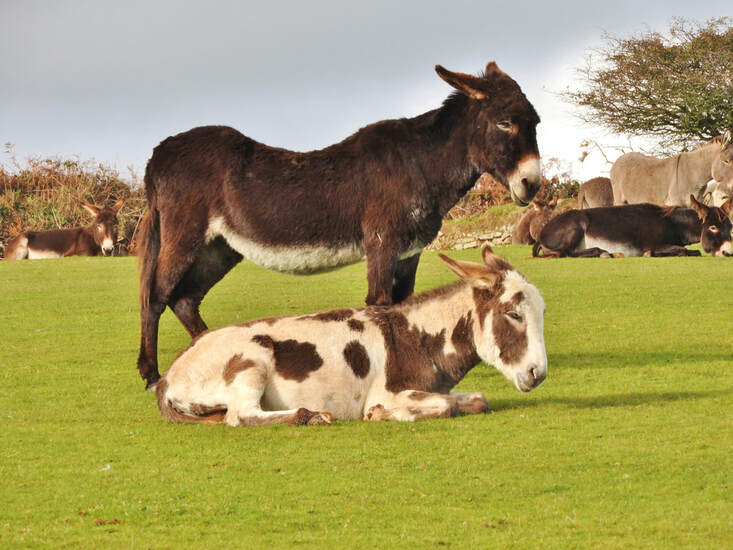 Susie was originally from Bulgaria where she spent 10/11 years of her life pulling heavy carts. When she wasn't working she was hobbled (legs tied together) and has the scars around her pasterns (ankles) from the rope. Susie then spent umpteen years in a petting zoo giving rides. On arrival, her body shape and age (initially indicating around 30's) led us to believe she had borne many foals, however on inspection of her teeth, although sharp and requiring dental treatment, it would seem she is in her 20's. Susie was due to go out to her 10* new foster home imminently, but... then we discovered she was in foal! So this beautiful, kind and gentle soul who had endured a very tough and hard life was not going anywhere.

Once confirmed we knew the birth was imminent, no-one can predict when a donkey will give birth, the gestation is anything between 11 - 14 months and we don't know when she conceived, clinical signs were very prevalent, for nine consecutive nights we kept, initially a two hourly vigil, then one hour. Then on Wednesday 4th August 2016 at 11.10 pm, the lovely Susie began giving birth, what a privilege to be there quietly observing.

Susie is just the most wonderful Mum and Thomas is growing into a fine young donkey. He enjoys many hours of rough and tumble with his best friend Olly, who was born at Flicka a year after Thomas was!
Adopt Susie or Thomas now!